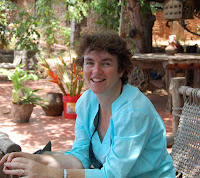 The cacophony of bird song in dry country areas is spectacular. If you live in mainly green surrounds, you forget the sheer volume and variety of the various calls from these noisy creatures that are your constant companions from before daybreak to after night fall. Twitcher or not, these birds demand your attention and there is no escape. 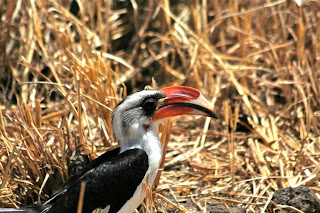 It starts pretty early, especially if there is a full moon, with the squeaky bed-spring bird that has decided that the patch just by your tent is the perfect place to let rip. Koki koki koki, getting faster and faster as the Coqui Francolin gets into its stride. Any thoughts of a lie-in are swiftly dismissed, as you awake with a start. Who needs a morning wake up at 6.15 am when these birds will happily do it at 5.30? It seems pretty ironic that this incredibly loud sound emits from such a skulking, shy creature. 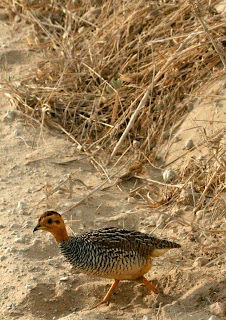 Not surprisingly, the tuneless alarm, with no snooze button, gets the others going and soon you are surrounded by Red-eyed Doves (I AM the red-eyed dove), Mourning Doves (wu HOOO wu, wu HOOO wu krrrrrroaw) and all their numerous relatives and friends, full of morning vim and vigour as you stagger to your vehicle, clutching binoculars and peering owlishly through your specs at the scene that greets you: that wonderful, crisp, clear morning air before the African sun has started warming the earth.

In the bush around your car, the Red-billed Buffalo Weavers and the Masked Weavers have got going and are hopping around the trees and the ground below, being very, very busy indeed.

The Red-billed Hornbill sits on a termite mound, peeping gently to the inhabitants within. WuckWuckWuckWuckaWucka. Soon, a brown, furry head pops up out of the hole, scratches itself and heads back to wake the rest of the dwarf mongoose pack. Since, by this stage, you have been awake for more than two hours, you are definitely envious that these smart creatures have such a civilised introduction to the day.
By breakfast time, more of the avifauna are ruffling their feathers, preening and setting out for yet another successful forage. The helmeted guinea fowl chuckle softly, moving onto an alarmed kakakakakakakaaarrrrrrr, fluffing up their billowing, spotted skirts, as they run this way and that, worried at intrusions and eventually settling down to a determined peck.

You are just about to tuck into your bacon and egg sandwich when a loud Screeeeech gives you pause for thought and a brilliant flash of green and orange whistles past into the dense foliage of a nearby baobab. The Orange-bellied Parrot. Much more soothing, but no less dramatic, are the mini-screeches from the small flocks of Yellow-collared Lovebirds, as they flit to and fro, from ground to tree, a spectacularly colourful display of emerald green and sunflower yellow.

No dry season would be complete without the large flocks of Red-billed Quelea. Thousands move as one, flowing in waves, twisting and turning with the leaders. Catch them in the heat of midday coming into drink at the river and the sight is spectacular. The noise from thousands upon thousands of continuous, small chatterings can be almost deafening. 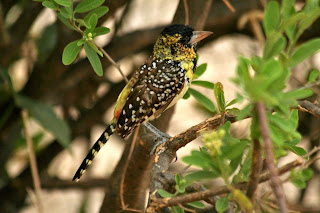 The soft boom of the Southern Ground Hornbill or the squawk of the Violet-backed Starlings; the Babblers and Barbets, Brown-hooded Kingfishers, European Bee-eaters, Nubian Woodpeckers; the tink tink tink of the Blacksmith Plover and the kreekree kreeip of the Crowned Plover. The list is endless, the sounds distinctive and the action ubiquitous. There is never a dull moment in a dry season park, as there is always some interesting, feathered friend hopping about and chirping brightly.

Not all the birds are as noisy and active. Early morning will see the large birds of prey sitting gloomily on the top of a tree, waiting for the sun to give them enough thermal lift. You feel they share some of your horror at the early morning wake up, as they get mobbed by screeching Shrikes and Starlings if they are discovered too close to some nest or territory.

As night falls, the birds all head to their roosts and silence slowly descends as they fall asleep, exhausted from the day’s exertions. Not long after, you do the same. But just as you start floating off, the Pearl-spotted Owlet with its rising peep gets going or the prrrrrp-prrrrrrp of the Scops Owl seeps into your tent along with the wikwikwikuwik of the Slender-tailed Nightjar on the move, gently reminding you that this is their time. Luckily, they have more respect for the sanctity of the night and the gentle hoots will lull you to sleep.

Yet this time, your sleep will be a satisfying one and the extra early wake-up, a pleasure. The best thing about all of this avi-torture is that you soon become an instant bird expert, picking out the loud Haaa Haaa Haaa of the Go-away Bird with the ease of a professional. The calls are so distinctive and individual, that the names will just trip off your tongue, as you point, with knowing smugness, in the direction of the third branch from the top of the small acacia bush on the right, where a Diederik Cuckoo is perched. deedeedeeDEEderick

By Chediel Mnzava
For more than twenty years, my clients had been hoping not only to see the Migration, but also to see the wildebeest crossing the Mara River in the northern Serengeti. On 5th Sept 2010, I met them at Lake Manyara airstrip but it was not until four days later that we got to the northern Serengeti, as we spent two days exploring Ngorongoro Crater and the Highlands and another two days exploring central Serengeti.
We finally got to northern Serengeti on the fifth day. With our fingers firmly crossed, hoping to catch a crossing, we set out for the Mara River to see if anything was happening there. 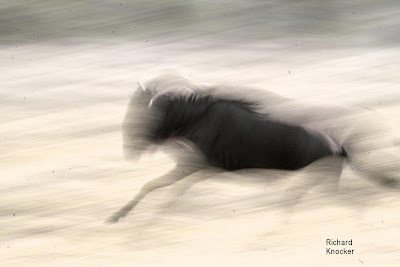 We found a big herd of wildebeest gathered by the river, with more coming from the plains behind to join them. The pressure from the collective herd was growing and they wanted to cross but were undecided if this was the best time or place. So they kept following the river downstream and we kept following them, from a distance, so as not to panic them. After some time, they started to pick up speed. I raised my binoculars to my eyes to see what was going on. "They are crossing" I said briefly, so as not to waste time talking. We rushed to the crossing point and there it was, a perfect crossing. The herd was huge; the river bank high; the river deep and the current strong, but their instint was definitely stronger than all of that and they kept running down to the crossing point from all directions and they kept crossing. 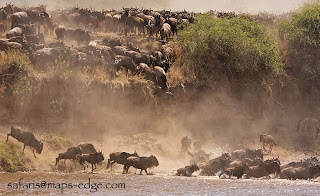 We watched this drama going on for rmore than 40 minutes non-stop. We could not have asked for more. The clients felt their dream had come true.  "I have been involved in several animal counts in southern Africa but never in my life have I seen so many animals as I have seen here, and on this entire trip. Anyone who wants to see game should come to Tanzania, you have a great country." 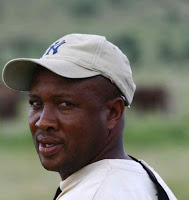 The first day from the airstrip to the camp is as good a start to a safari as you could possibly hope for: a herd of elephants cross in front of our vehicle, a hyena rests in the mud wallow and there are always the giraffe to look at. 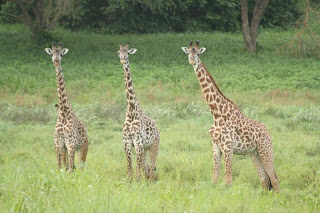 During our stay at the mobile camp, we had good sightings of the wildebeest crossing the Mara River The crossing lasted for about 30 minutes but only after a long wait. A lioness was teaching her cub how to hunt. She brought down a wildebeest calf but left it only half-dead and then let the cub do the rest. Amazingly, on our way back to camp, a black rhino emerged from the bush. There are so few of these endangered animals left in the wild that any sighting is truly special.

Next was a visit to the village school and the BBQ of goat roasted by the Maasai. 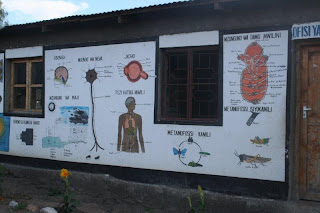 The crocodile enjoy a free meal of some weak wildebeest that had drowned and the hippo are chilled out, sunbathing and watching the mass of wildebeest and zebra being pushed down by the water and current then struggling to reach the other side of this monster river. 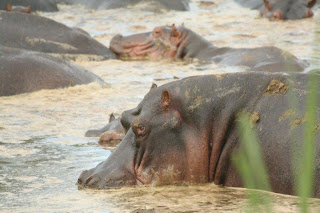 The three cheetah brothers chase a yearling wildebeest and bring it down, tucking in from the rear, eating as fast as they can. Within a few minutes, the vultures arrive and wait around to take their turn. 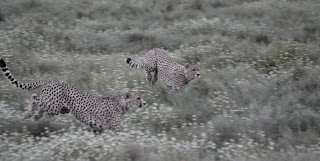 Did I forget to mention the oribi, jackal and all the other game we saw?
Posted by The Map's Edge at 1:45 PM No comments: