The Spices of Life. 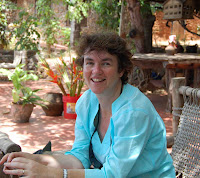 By Jules Knocker
Photos by India Howell and Annie Birch

You know what it is like: if you live in a country, you never actually travel around to see what is sitting on your own doorstep. It is so easy to put it off to another day. Exciting and exotic foreign climes seduce with their Siren calls and the days and years go by.

A couple of months ago, we were on Zanzibar with a group of friends and we decided to try out the Spice Tour, fully expecting a mildly entertaining morning, and feeling virtuous by taking an exercise break from chilled dawas and that extra plate of garlic tiger prawns and tender calamari rings that we could not resist the night before, around the pool.

Insufferably smug, we set off early to avoid the heat of the day – sunglasses and hats to the ready. After all, we live here... we know a thing or two or four!

How wrong we were! It turns out we knew almost nothing about many of the spices that infuse and seduce the dishes that we eat. 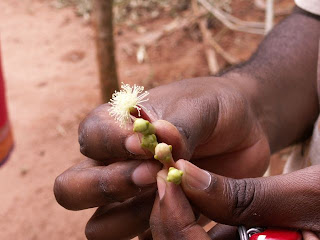 Fresh cloves and their flowers
Spices have, for well over a century, been a staple revenue earner for the island yet they are not indigenous. The Omani Sultan's Chief Envoy brought the plants over with him in the mid 19th century to try and provide some income and develop an economy for the poverty stricken isle. It took off and Zanzibar was soon known as the Spice Island. Jute bags of cloves, dried vanilla pods and nutmeg would line the shores to be loaded onto the wooden trading dhows and off they would sail, with the monsoon winds, to be delivered all over the world, leaving just a hint of exotic smells behind on the shore. I remember visiting Zanzibar in 1994 and coming across a small, wooden sailing jahazi on the beach. The captain was making repairs to the old planks and caulking the inevitable holes. Leaning into the empty skiff to watch his tradecraft, we were rewarded with a delicious aroma of wood, sea mist and cloves. The spice had left its mark long after departing those shores.

Back to the Spice Tour. The guide took his job seriously and we had to work hard for him. We had to guess what each plant was – he was not going to help. ‘Ginger’ we cried triumphant, as we spotted the telltale long leaves wrapped around a thick stem, only to be shown quite clearly that this was actually turmeric or one of two different types of cardamom. All the same family but such a variety of colours and tastes. Cardamom is the seed from the flower stalks but turmeric is the root, just like ginger. 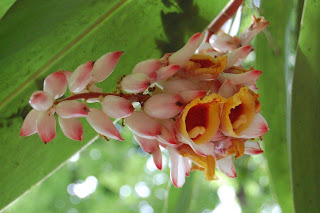 Cardamon flowers
Vanilla orchids wove along branches and posts. Each flower has to be individually pollinated by hand every morning. The blooms are only pollinated in the wild by a tiny bee, the Melipone, which cannot survive outside its native Mexico. So never let your plant grow wild or you will have to shin up into the heights of the tree canopy to get at the flowers. 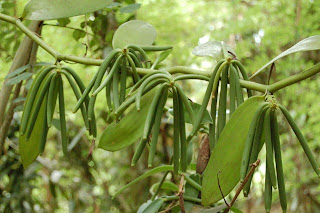 Vanilla pods
The piece-de-resistance was undoubtedly an unassuming greengage-type fruit. We could not even begin to guess that one. The guide cut it carefully open to reveal a veritable jewel: a beautiful, shiny, chestnut-coloured nutmeg covered in an intricate lattice work of deep-red mace. A glittering treasure in plain wrapping. 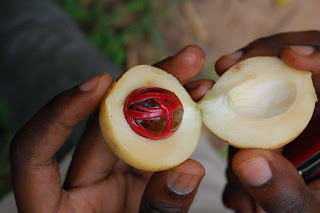 Nutmeg and Mace
The seed pods that produce the red dye used in chicken tikka, the blooms on the stumpy trees that end up as cloves, the bark that transforms into cinnamon sticks, the lemon grass tufts - it is all there waiting to be discovered. 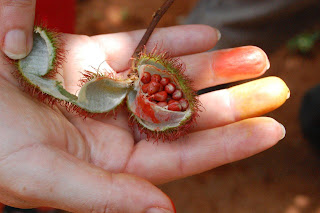 The tikka dye on my fourth finger and the stain from tumeric on my middle finger
And at the end of it all, cups of tea flavoured with the different fruits, leaves, pods and barks that were, finally, familiar to us.

And the dawas? Crush 2-3 juicy limes and pop the juice in a wide glass, add a generous desert spoon of honey (more if limes are too tart) and mix. Add in the lime skins and fill with crushed ice then pour over a generous tot of cane spirit or vodka. Stir well and sip contentedly as the ice melts......

Repeat repeatedly.
Posted by The Map's Edge at 3:02 PM No comments: