What a pleasure to spend a few days in Moru once again.

Moru Kopjes, in central Serengeti, is one of the park’s iconic landscapes – great looming outcrops of granite, like so many whale backs, rolling through a grassy ocean. The up-thrust rocks give all kinds of trees a toehold, somewhere where they can flourish in the otherwise undifferentiated grassland. Each kopje is a botanical wonderland, with a crazy profusion of growth – and this, in turn, makes rich habitat for all kinds of birds, reptiles and mammals. 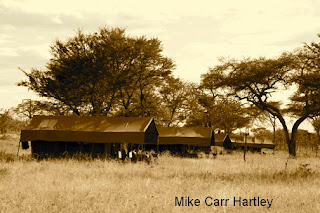 We are camped up by Ol Donyo Olobaaye (‘the last hill’), with long views over the plains, dotted at this time with zebra and gazelle. On the way to camp, we are blessed with 3 leopard sightings. One even climbs a tree for us, just to impress with his power and agility.
Late that afternoon, we are rewarded with sightings of spotted hyena and then a caracal, the elegant lynx of Africa. 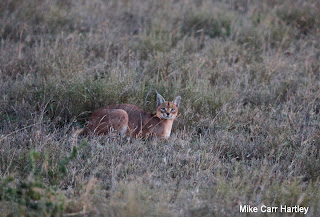 Next day, we aim to take in the whole Moru area, but it is not to be – we come across a hunting cheetah, not far from camp. She spots a young gazelle and, after a short stalk, accelerates to full speed. At first, it looks as though the gazelle must get away but the cheetah quickly closes the gap and takes it down in a flurry of dust. She drags her prey into the shade of a bush and sinks down, suddenly invisible.
There is a pride of lion a little further on, with 3 young males right by the road, and the light is fabulous. We enjoy the sight, before tearing ourselves away to follow the river downstream with elephant, buffalo and giraffe along the way – then another pride of lion, whiling away the hours in the shade of a desert date. There are 5 tiny cubs; they can’t be more than a couple of months old. We spend a good long time here and as we are about to move away, 3 of the females spot a herd of zebra in the thick bush down by the river. They move purposefully into position. This is beginning to look like a 2-kill morning! 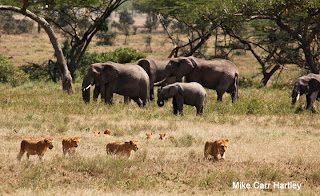 Meanwhile, a large herd of elephant is drifting our way. This could get interesting, as elephant don’t get on well with lion. Sure enough, they pick up the smell of large cat and several adults come over, ears out and looking like they want to show everyone exactly who’s boss around here. The male lions very quickly decide that discretion is the better part of valour and head for the rocks, quickly followed by the remaining adults. The cubs stare in consternation at the huge grey legs towering over them, then turn tail… another safari vehicle chooses this moment to move into a better position, which spooks the already nervous cubs, and they shoot off in the wrong direction.

The cats have all disappeared and there’s nothing to show for this little drama, except a herd of elephant, snoozing in the shade. We are concerned for the cubs – their mother is away hunting and they are on their own. She will find them easily enough later, but in the meantime they are at risk from a whole suite of predators – leopard, hyena, python or even a large eagle. Eventually, we turn and head for home.
The next morning, en route to our next camp, we swing by the pride again. Most of the adults are perched decoratively on a nearby kopje, every inch the kings and queens of the jungle. No sign of the cubs or their mother though; this could just be because she has them hidden away in a safe nook somewhere but we aren’t totally reassured.

Later, on a little used track, a herd of kongoni run from the car; why are they so wary of humans? The herd splits and we watch one group, as they bounce away with their distinctive gait. Mikey spots a lion – ‘Where did she comes from?’ There are 2 of them and they are feeding. The fleeing kongoni must have run straight past them and they made an opportunistic kill. Feeling a tad guilty, we continue on our way.

In the meantime, our home has been moved – the camp is now in the heart of the Western Corridor. We are here hoping for the migration. Once the southern plains dry up and the grazing around central Serengeti has been depleted, this is where the great herds come. In theory, at any rate – the whole migrations story seems so cut-and-dried, it scarcely seems possible to miss out. After all, there are over a million of these animals! The reality, however, isn’t so simple. Some of the cues (weather, grazing etc) that drive the migration are too subtle for mere humans to grasp.

We are in luck though. Next morning, we come over a rise into a great throng of wildebeest, all honking and mooing, a great wall of sound. For the rest of the morning, we are surrounded wherever we go. A terrific sight.


We had been watching the weather charts for days. It wasn’t looking good. Should we cancel the weekend or go somewhere else, somewhere with sunny skies and no black cotton soil? Nah… it would be fine.
So, the six of us set off to Mkomazi National Park, in a highly modified Land Rover and a ‘well loved’ Land Cruiser aka the “Anti-Christ” with its '666' number plate. As you can imagine from the very start, the Land Cruiser vrs Land Rover snipes were being texted between the two vehicles. Which was the real safari car?
We were only going for two nights and yet the cars were stuffed to the gunnels. I think it was the odd case of Pinot Grigio and slabs of cold beer that took up the majority of space. I, on the other hand, had packed my Ribena juice and granola bars.
It was time to get out of the office, back into the bush and what better way to do it than with a bunch of good mates? Just because we all work in the safari industry sadly, it doesn’t mean we spend our whole time in the bush.
Passing through the Park entrance gate, to our delight, we saw that we were the only people in the park. How brilliant is that? An entire Park to ourselves!

Squeaking into the campsite just before dark, we were half way through putting up tents when the heavens opened. It rained for a solid 4 hours. We got absolutely soaked to the bone. A makeshift tarpaulin and a dead acacia became our mess tent. Hey, we are safaris gurus - we improvised! The tarp leaked, the wind and horizontal rain put out our gas stove and our strip light was buggered. Gurus? … but at least the beers & wine were cold.

After a hearty breakfast, we set out to explore. Mkomazi is not known for her spectacular wildlife and rarely features on the normal milk run of the northern Tanzanian safari circuit. The game drive lasted 7 hours and, in that time, we saw a total of four different mammals and usually only the southern end of a north-going mammal. Thank God, we didn’t have paying clients along.

When the going gets this tough, it is a challenge to be kept entertained and this daunting duty lay solely at the feet of Richard Knocker. He thought he had the weekend off from his guiding duties… nope, sorry mate.

The passengers on board were probably worse than having paying clients. We all know our stuff, having been pro-guides ourselves. We have an intimate knowledge of the bush and there is little we don’t know. Well, that’s what we thought…..

No cats, no kills were seen that day. Man, that sounds boring, you might think. However…. it takes 7 hours of seeing absolutely ‘nothing’ to release just what it takes to be a real pro-guide. I have never had such an entertaining, interesting nor educational day. When the big five didn’t materialize, Richard kept us mesmerized with all the ‘small’ stuff. We learnt about robber flies, butterflies, trees, flowers. We read tracks & spoor down the road, learnt what leaves to eat if you have worms and what not to do when you hear ox pecker birds exploding out of thick bush whilst on foot - an indication that buffalo are present really close by. We chewed on things, smelt things, walked up kopjes, held poo and dissected owl pellets to find the jaw bones of different rodent species. Seven hours went by in a flash and still not a cat in sight. One of the best game drives we’d all had ever, except for the teeny weenie fact that the cooler box of beer & wine had been left behind in camp.


Golden Pipit
The birdlife of Mkomazi is absolutely amazing and I find it fitting that our favorite bird of the weekend was the Golden Pipit.

Oh, did I mention that Richard has just passed his Gold level exam with the Kenya Professional Safari Guides Association (KPSGA), one of only 10 in East Africa, and the only Gold level Guide in Tanzania? A Golden bird spotted by a Golden Guide, aka “Gigi”. Would I have paid good money to have been in Mkomazi with him? Dead right, I would have!
Posted by The Map's Edge at 6:21 PM No comments: