The challenge of the Migration

Chediel Mnzava
Here we are in the Southern Serengeti in April and the clients arrived from a safari in Kenya, with two of the top Kenyan Private Guides. The Challenge was on as they had all had a very successful safari in Kenya and had watched good sightings of almost all the big game but they wanted to witness the Wildebeest Migration and some lions. It was our job to show that the Serengeti could more than live up to its northern neighbour, not just for the Migration but for the whole safari experience. For many years, Tanzania had been seen as the poorer cousin in terms of safari but in the last ten years or so, it has managed to throw off that misconception and come into its own.

At the end of their four nights, they were convinced that coming to Tanzania had added so much more than expected to their trip: a nice pride of 14 healthy lions, attempted lion hunts and the plains were teeming with wildebeest, zebra and plenty of other game. And the great Serengeti views: grassland, waterholes, kopjes, hills and mountains. 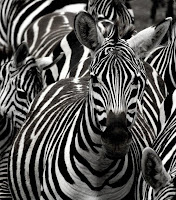