Tales of the Unexpected.

Sometimes, things happen in the bush which are not explained by the usual 'blah blah' of animal behaviour guide books. It shows how much we still really do not know of these matters. I observed a group of  three cheetah brothers and close by, three nearly adult cubs and their mother. The posture of the three brothers was head low, stiff legged walking which usually signifies agression. I assumed that mother and the cubs would flee but  they turned and attacked the coalition of males in unison until they reached a stalemate, whereby all seven settled down in close proximity to each other, looking puzzled, like me I suppose, by the behaviour of the young cheetah cubs and their mother. They never expected that challenge either. 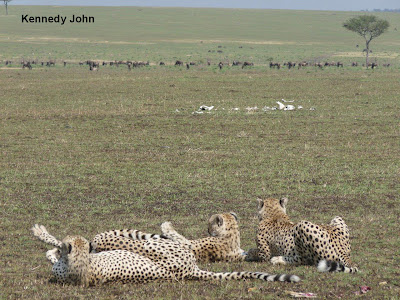 A story of unusual cooperation near Tarangire Silale Swamp. It is a normal thing to see feathered creatures such as oxpeckers clean buffalo by taking off the ticks and other insect life from their hides. But it is not at all normal to see a bird cleaning another bird. I observer this fork-tailed drongo, perched on the bulbous head  of a Black-chested Snake Eagle. Thinking that this small bird was about to attack and maybe kill a large eagle though the eagle was doing nothing to get away, I picked up my binos and to see exactly what was happening. The insect collecter was actually picking parasites off the head of the eagle. I do not know if it was a common occurence in some places but to me, it was a new thing: to observe brids cleaning each other. Was it mutual benefit? Yes definitely. Drongo gets food and eagle gets cleaned, isn’t nature wonderful!
Posted by The Map's Edge at 3:22 PM